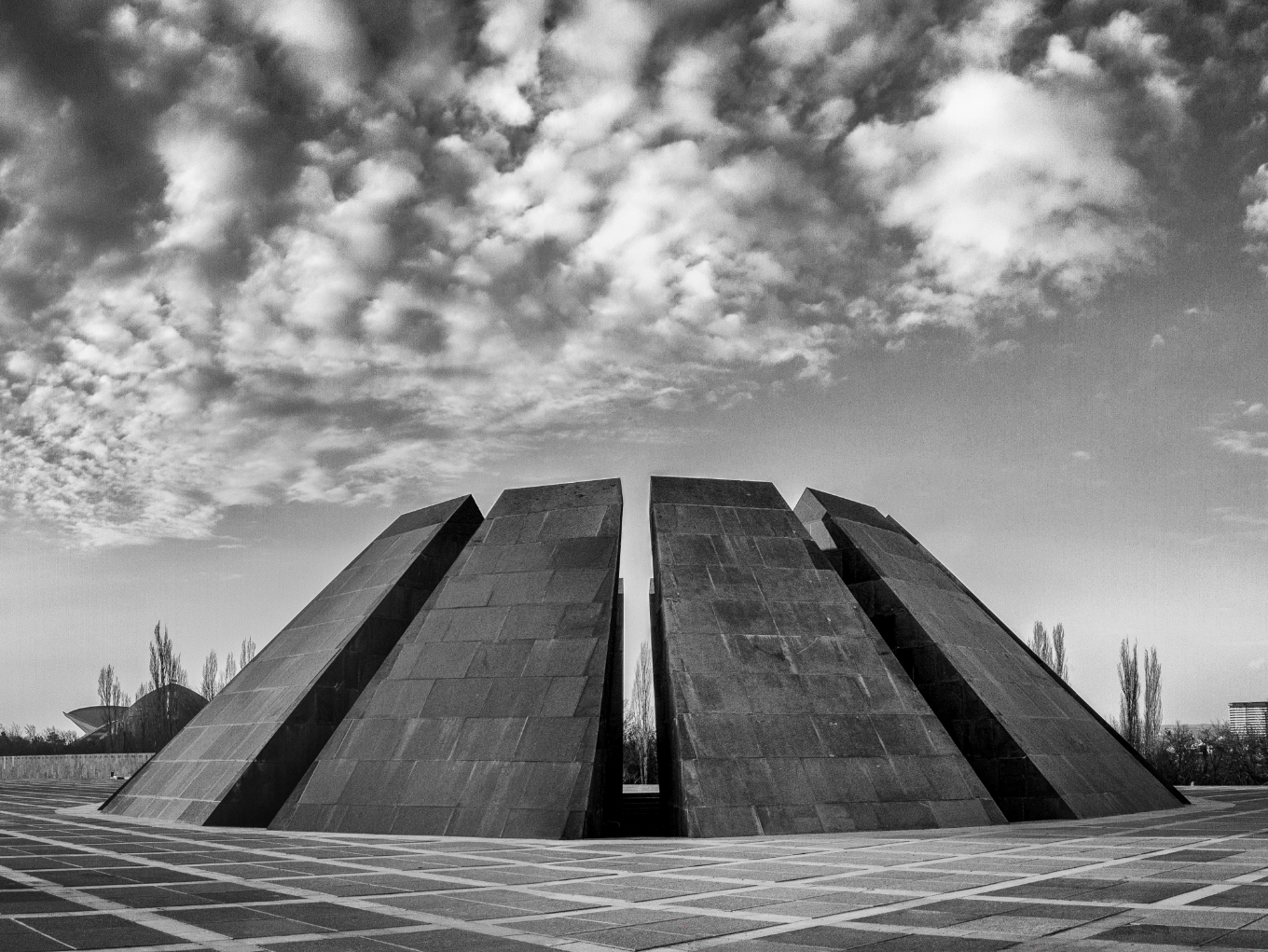 “I believe that everything that happens to me now goes back to 1915.” Araz Artinian says in a voiceover.

In her documentary, The Genocide in Me, Artinian puts into one breath what I have been trying to articulate my entire life: the Armenian Genocide of 1915 has much, if not everything to do with who I am today. That identification hinders me too. While I reach to the past to understand who I am today, I wonder if there can be more to being Armenian than Genocide.

William Saroyan said: “It is simply in the nature of Armenian to study, to learn, to question, to speculate, to discover, to invent, to revise, to restore, to preserve, to make, and to give.”

But also this: “What a lonely and silly thing it is to be an Armenian writer in America.”

I’ve always known on some level that Armenians come from a long line of craftsman and artists and thinkers. After all, I was named after the ancient city, Ani, a city known for its craftsmanship of fine arts; my Armenian roots unearthed at my naming. To not forget my Armenian-ness even as the American flag waves around me.

My Father gives me a book when I am in college in the 1990’s, out of the house and living 30 miles away in Berkeley. When he hands it to me, I nearly drop it—it’s so heavy. The cover is blood red; Armenian Genocide written in big bold letters. The book is a collection of articles that corroborate the evidence of wrongdoing by the Young Turks. Yet, Turkey still denies, to this day, a plan was in place for what they called the “Armenian Problem.” The solution: To kill the men and boys and drive the women and children into the Syrian desert for what the Young Turks deemed relocation—without water or food or protection from the relentless sun. To murder families in their homes. To make orphans. Relocation was, in truth, synonymous for rape and murder, starvation and death.

The articles in this big, red book tell the story of the Fate of Armenians in grainy pictures and blurry black and white photocopied news clippings. I feel helpless and voyeuristic reading through the fate of my people. My empathy useless from the comforts of my couch. The cruelty feels so far away, in another time altogether. It isn’t just the book that he’s giving me. My father passes on the burden of this knowledge, the unrequited truth, preparing me for a war for survival that he’s sure will come. He doesn’t realize the war is already within me.

We commemorate the million dead on April 15. I’m eight when I see my first film filled with beheaded intellectuals and uncovered mass graves. I give presentations to my suburban classmates on the Armenian Genocide when given a school project About Myself.

“Are you a terrorist?” my classmates asked. This was Ronald Reagan’s 1980’s and Iran-Contra was well underway.

“We’re Armenian. My father is a rug dealer,” I offer.

I hope that my essays and presentations will tell my peers for that I’m Armenian, not Iranian, from immigrants, not terrorists. Because my family knows Iranian families, too, I know that not all Iranians have bombs in their trunks.

I try my best to explain the political complexities that come with Turkish Denial.

It was a war, the modern Turkish government contends.

But how does a kid take on the government of Turkey?

The answer is that I couldn’t.

The denial of a people’s sorrow runs like the rivers Euphrates and Tigris, through the generations. 1915 is where I believe grief became engrained in my family’s DNA.

…Armenians had been introduced to the Bible’s legend of the Garden of Eden and had concluded the Euphrates and the Tigris Rivers, with their sources in the Highland, flowed into the Garden of Eden. From this…Armenians came to believe that they were specially connected to the lands described in Genesis 2:8-15. (Abrahamian 28-29)

Being exiled from your homeland, without reparations, affects us, the great, great grandchildren of victimization. How does this affect one’s outlook on life in general?  How do we carry the burden? One answer is that personal sorrow on top of the greater grief is almost too much to bear.

I live through cancer and my Armenian father’s cancer, the cancers overlapping. My extended Armenian family, no stranger to illness. Many cancers and early deaths pepper our familial landscape, black specks on hills and valleys. My grandmother, the matriarch of the family, grew older and sadder after each funeral. My father’s eventual death, too much for her to bear in the end, her eyes perpetually swollen. My grandmother had already lost a son, Vahe in his twenties to kidney disease, her brothers, her husband, and now a second son. Even the strong need rest.

The kidney is a beacon, settling generations of us in a foggy city with an azure seascape like Istanbul’s, familiar but not.  My father’s youngest brother needs one and the technology had been at UCSF.  My uncle, the second youngest, is a match where my father is not.  When the new kidney fails, youngest brother gone, we stay because we don’t have anywhere else to go.  I’m born the year after and because of the kidney we stay.

Armenian life has always been centered on home and family and informed by a deep attachment to the ancestral land. Those who have left their homeland, for one reason or another, try to recreate it in their own land. (Abrahamian 73)

My grandmother is by far the strongest woman I have ever known. “She is made of rock,” my mother repeated this Armenian phrase often in regard to Yaya. And when I look at the pictures of Armenian women in books, I see the same stony hardness.

The present generation concerns itself with spas and facials and massages and the emphasis in the modern world is on self-care. They wonder what the Kardashians are up to. My grandmother didn’t have these luxuries. She loved cooking and in her last year, even took up Chinese cuisine.

“Port-zenck,” she said in Armenian. Let’s try it.

Her creative outlets, cooking, sewing and knitting were practical. In the end, she would have fed her brothers and sisters, husband, in-laws, her children, grandchildren and great grandchildren for at least 70 of her 86 years. Thousands and thousands of meals.

…the Armenian system of values and beliefs as expressed by cultural leaders and through community celebrations: the unremitting need to fight evil, the defeat of death by feasting, the musical expression of these beliefs in crucial truths… (Abrahamian 205)

The Armenian culture has long been based on survival, which means acquiring a practical profession.

“I want to be a writer,” I say one night at the dinner table.

“Then you’ll be poor,” my mother replies.

The answer is clear: become a writer and you won’t survive this harsh world.

Ironically, after surviving cancer in my mid-thirties I feel the undeniable pull towards language that writers know. I enroll in an M.F.A program and begin writing my story. I haven’t stopped since.

One sunny day during a California November, I walk out of facial appointment at the W Hotel onto Harrison Street. I have of those online coupon deals, because my Armenian half likes a bargain. San Francisco is sunny in November and I’m hoping to meet my husband for lunch, but he texts me last minute to say he can’t make it because of a work meeting. Disappointed, I walk toward BART for two long blocks on Market Street, stop, then turn around. I feel the pull.

MOMA is closed for renovations, so I head toward the CJM, the Contemporary Jewish Museum. I’m self-indulgently searching for connections to my identity through the only other parallel I can identify with: The Holocaust. But there isn’t anything about the Holocaust in the Contemporary Museum.

“People always think they are going to see Holocaust pictures when they come in,” Kathryn Jaller, a curator said. She invited me to come in anyway.

I’m in the film-viewing room when I hear Kathryn say to the room, “Would you all like to participate in this installation?” I don’t realize there are three other people here, each looking at a different piece. Can we say no?

“We’d also like to take a picture and a video if that’s okay,” she says.

We’re led around artist Ohad Meromi’s wooden platform, centered in the room. I have walked by it just minutes before; the intimidating black costumes hanging in the corner. Now we’re putting them on.

“Each one is different,” Kathryn says. “Now follow me to the middle of the platform.”

We stand in a line, our bodies taking the different shapes of the costumes. I feel a little like Bjork.

“Now think of something that gives you joy,” she says.

I think about surviving cancer. I think about writing. I think about how the spirit of art goes on even after genocide and holocaust. Yes, we must never forget, but we must go on the same. As the descendants of trauma, we hold many contradicting truths at the same time. These contradictions are the things that ultimately shape us.

Ani Tascian’s work appears in Citron Review, Bird's Thumb, Foliate Review and others. Ani currently teaches creative writing at various Bay Area elementary schools and memoir classes at Berkeley Adult School. She's been awarded residencies at VONA and Vermont Studio Center and holds an MFA from Saint Mary's College of California. She's currently working on a book-length memoir about how generational trauma is held in families and in the body.