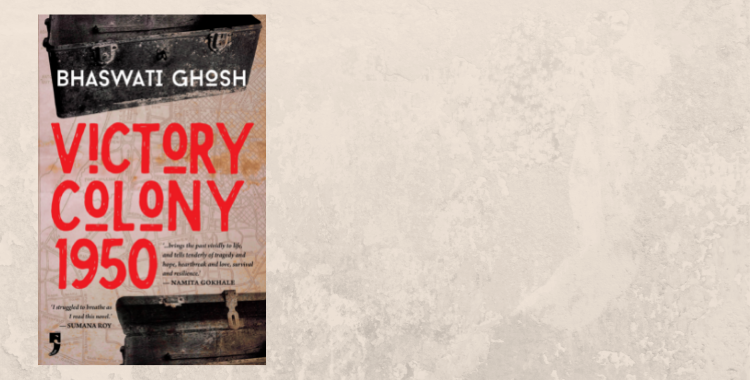 Bhaswati Ghosh’s Victory Colony, 1950, is a portrait of resilience and a testament to humanity. The novel set in eastern India in the aftermath of the partition is essentially the story of refugees. But it is also much more than that. It is a tale of finding home, warmth and love in the most adverse of conditions. Bereft of the home they left behind, the refugees struggle to build something of their own, all the while tackling the label attached to them and the weight it carries.

The novel follows a linear structure, but with interspersing storylines. The stories from the camp are told to us through the voices of Amala, who is herself a refugee, and Manas, a volunteer who is constantly battling his privilege to find a sense of belonging among the people he encounters at the camp. The narrative voice jumps between both, thereby giving us a picture of the entirely different worlds they inhabit. The budding relationship between the two forms another heartwarming plot. Privilege, caste, status are all silent partners in their story. Amala’s search for her lost brother, along with snippets from her past life, stands in stark contrast to Manas’ stories of his aristocratic family and his disposition. A host of powerful women characters, who are go-getters and sometimes, even the sole breadwinners of the family, dominates the novel.

The initial clamour of the railway station in the first scene unsettles the reader much like the characters. This chaos remains with the reader even after the very end. Ghosh is careful of not fully allowing her readers to ease into familiarity. Unexpected events scattered throughout the narrative throw us off. In a way, it almost feels as if the author is trying to convey that the suffering of the migrants will be unfathomable to us, no matter how hard we sympathize or empathize. The end of the novel feels a bit rushed as conflicts that lasted throughout are solved within a few scenes. For instance, Amala’s quest for her brother ends too soon and too conveniently.

The Bengal of the 1950s pans out vividly before us; its soul captured through the places, the food, the transport, and the people. The power of Ghosh’s writing is such that each scene comes alive in front of our eyes. Language and food are the central agencies Ghosh employs to bring forth the Calcutta of her vision. These two are incidentally also the tools she uses to convey loss. Amala’s longing for the language and food of her lost home conveys a deep sense of pain and anguish. Ghosh’s insistence on the use of Bengali/Bangla in between conversations and in describing certain objects not only brushes away the monotony of English but also invokes the soul of Calcutta in the readers.

There is much scope to turn the novel into a harrowing and haunting tale, but Ghosh subverts it to a heartwarming story of resilience, hope and courage, all the while remaining true to what she intended to portray. Triggered memories and bouts of madness give us subtle glimpses into the trauma felt by the characters. Instead of agony taking over, the focus is on their acts of overcoming these painful reminiscences. Poverty, loss, death and grief take the back seat as the people in the camp collectively come together to hope, love and forget.

We read and hear stories of refugees, the crisis that triggers an exodus; we watch in horror as people are displaced from their lands, robbed of their livelihoods and snatched away from their loved ones. Likewise, the stories of partition are aplenty, recounted every year at the respective commemorative days. What we fail to do is empathize and recognize. Victory Colony, 1950, gives those nameless and faceless entities an identity and humaneness that we often willingly fail to perceive.

Karthika has a post-graduate degree in English Literature. She is a voracious reader and looks forward to a career around words and books. She currently resides in Trivandrum.