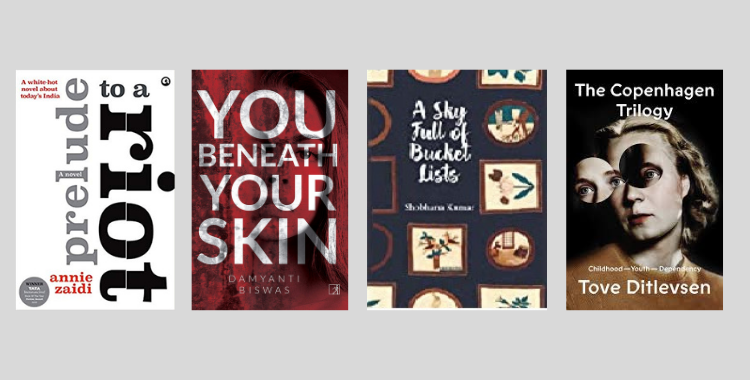 Prelude to a Riot by Annie Zaidi

Prelude to a Riot is a finely controlled exploration of how communal feelings are fanned through tutored hatred, prodded along by presumptions of fear and antagonism, always tethered to the possibility of future hostility from the ‘other’. The story is told through multiple ‘soliloquies’. Though the polyphony builds up to a collective picture, each voice seems to exist in its own lonely corner, making it either fearful of the other, distrustful, or plain angry. In each case, we see an individual/ community on the brink of something momentous, the threshold never certain, emotions palpable and spiralling out of control.

In this sense, the book seems to be poised at this first step, the ‘prelude’ to many trajectories, but especially the culmination of communal hatred. By the time we finish reading the book, we are left with the lingering, heavy feeling that the story will now begin and it will not be one to rest our demons – the demons are lurking around the edges, waiting for the final nudge.

Prelude to a Riot forces us to think of where we are headed in these polarised times and how we have been moving towards this juncture. –Sucharita Dutta-Asane, Fiction Editor.

You Beneath Your Skin by Damayanti Biswas

In You Beneath Your Skin, the author explores the extraordinary paths that parents traverse while protecting their children and the choices they make when their parental affiliation clashes with their moral responsibilities. The novel puts focus on the horrific crime of acid attacks on women while also observing how the pursuit of justice may get derailed by the personal connections of the investigators. Biswas’s characters are flawed and real, and she holds up a disquieting mirror. The adherence to reality sometimes makes the reading uncomfortable, but it is a discomfort that is all too familiar from newspaper reports that appear with unfailing regularity. In this novel set in Delhi, Biswas uses the choking smog of the city to good effect to depict the stranglehold tightening around the lives of the main characters.

You Beneath Your Skin raises questions about the masks people wear—the masks hiding strengths capable of shining through in adverse circumstances or disquieting weaknesses capable of wreaking unimaginable cruelty. It is a rare thriller that goes beyond crime to depict the wide chasm existing in society and how rules apply differentially among distinct classes of people. – Fehmida Zakeer, Essays Editor.

A Sky Full of Bucket Lists by Shobhana Kumar

Describing a poet’s work in their own words is mostly a rarity- but in reading Shobhana Kumar’s book of beautiful poems A Sky Full of Bucket Lists, my words overlap with hers.

And so, when she writes-

The deliciousness of rediscovery is like an addiction. Every spare moment is spent tracing the script..the birds sound like they too have embraced this new orchestra of lyric and syllable. Meter falls in step with the lilt of leaves on the trees.

The heart now knows that all roads come home

This book of haibun poetry has a rich tapestry of everyday emotions, often easily forgotten, but remembered by the poet. She talks about the stillness of lockdown, of distance, sickness and of Transit –

And while you notice the poet observing people every day as if in a slow dance, in poems like At the Wishing Fountain and Philosophy she closes in-

“Appa, the last time I held your hand, life ebbed away slowly shutting down organs..”

But suddenly she surprises you, in the sudden flutters:

Sporadic sounds of traffic.
Musings
a pigeon flies
into some fiction

The Copenhagen Trilogy by Tove Ditlevsen

Until Michael Favala Goldman sent us a translation of Tove Ditlevsen’s Den Onde Lykke (The Trouble with Happiness), I hadn’t heard of the author. Goldman had earlier, in 2019, also translated the third and last of Ditlevsen’s memoirs, Gift (Dependency). For the English-speaking world largely unfamiliar with the works of Tove Ditlevsen (1917-1978), Penguin has now brought out all three memoirs in one book called The Copenhagen Trilogy. This is an important book, which is as relevant in these times as it was when it was first published in Danish. The three books Childhood (1967), Youth (1967) and Dependency (1971) together portray the author’s struggles with relationships and addiction, while living in working-class Copenhagen. – Suhail Rasheed, Managing Editor.

[Every month, The Bangalore Review recommends a reading list, also mentioning in brief why each book must be read. This month’s list has been compiled by the Editorial Team.]