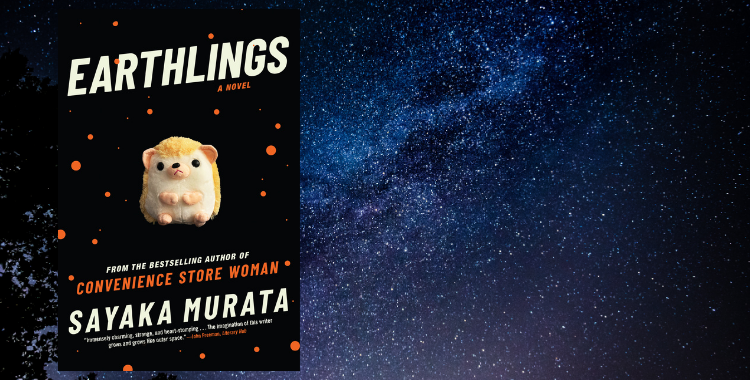 Sayaka Murata’s Earthlings (2020), translated into English by Ginny Tapley Takemori, is a slim yet eerie novel about a young woman who feels peripheral to the adult world. When the novel opens, Natsuki, the protagonist, is eleven years old and is on her way to her grandparents’ house in the mountains of Akishina for the Obon festival.

The Obon festival is a Japanese-Buddhist custom celebrated annually to honour the spirits of the ancestors. Natsuki’s family makes it a point to gather at Akishina for the festival every year. Akishina holds a special place in Natsuki’s story as it holds both the beginning and the end of the story. Every year at the festival, Natsuki meets Yuu, her cousin and boyfriend, who, Natsuki believes, is the only other person who is as peripheral. His belief about being extraterrestrial is something that Natsuki takes to quickly, “I wanted to become an alien, too, and I felt jealous of him having somewhere to go home to.”

In these parts, Earthlings feels too simplistic; but soon we learn about the more complicated aspects of Natsuki’s life: her difficult relationship with her family, the sexual and physical abuse she faces as a child, the silence around this abuse, and the alienation that follows her trauma. At a point in the novel, Natsuki describes an episode of sexual abuse as if viewing her “own body in silence from the ceiling”. As a child narrating these events, Natsuki does not supply us with an articulation of abuse that is now familiar to us in a post-MeToo world. There is a straightforwardness that is horrifying. These are some components that propel Earthlings into the “Murata-esque” landscape: dark, irreverent, and accompanied by a flatness that is naive perhaps, but never without affect.

In Convenience Store Woman (2018), which was Sayaka Murata’s first novel to be translated into English, the novel’s protagonist is certain that one has to somehow “hook-up with society”. In many of her writings, including Earthlings and her short story A Clean Marriage, Murata questions the need to fit into society. Her characters’ refuse to purchase the logic distributed in society—that one must conform. Why? Her oeuvre seems to ask.

When Convenience Store Woman was published in English in 2018, most reviews described it as elusive and strange. The American writer John Freeman went as far as to say that it exploits the ”tiny gap between the simple nature of things, and how they appear to us”. In Earthlings, Murata uses this tiny gap as if it were a crater. It is the gap between Akishina where “fragments of night linger even at midday” and the rest of the world.

The novel gets grimmer as it progresses. A leap in the story pushes the narration into an older Natsuki’s hands, a Natsuki who is married and in her thirties. Her discomfort with the adult world, now rarefied, sculpts the detachment of her tone, giving it a resounding, centered place in the novel. Ideas transform into ideologies. She believes the world is a factory that produces human babies; a place where people live in neatly lined up nests inside which breeding pairs raise their babies. Natsuki believes she belongs elsewhere, far away from this factory.

Natsuki’s husband, Tomoya, shares her disdain at the world. As a couple, they share little else. Natsuki’s stories about Akishina fascinate Tomoya, and over time he too, like Natsuki, desires to escape to Akishina. When Tomoya loses his job, they decide to take a trip to Akishina. They meet Yuu, who has been weathering his unemployment at Akishina. Here onward, the story spirals downwards. It speedily coasts towards the last section which reads like one breathless, stentorian shot, filled with grime, blood and saliva that will leave the reader with a taste of steel.

The prose is clear, and Ginny Tapley Takemori’s translation preserves the novel’s eccentric brand of juxtaposing the horrifying and the simple. If surrealism is, as Suzanne Cesaire wrote, “a permanent readiness for the marvelous and the strange;” then Murata’s stories are its gory cousins—bringing together the strange and the simple, like a decapitated head on a clean white bed. This disorienting nature of the novel resembles Natsuki’s refusal to conform. In an interview in 2019, Murata says, “through writing, what I was obedient to became visible.” In Earthlings, there is such a fierce allegiance to disobedience that it is almost a spectacle. Ultimately, the novel is about this disobedience as a method of survival. In the second chapter, a young Natsuki asks, “How long do we have to survive? When will we be able to live rather than just focusing on surviving?” Earthlings circles around this complex question that challenges our ideas of survival and living.

Barathi Nakkeeran is a New Delhi based independent researcher and a freelance book reviewer. Her book reviews have appeared or are forthcoming in the Chicago Review of Books, The Hindu, and the Entropy Magazine.