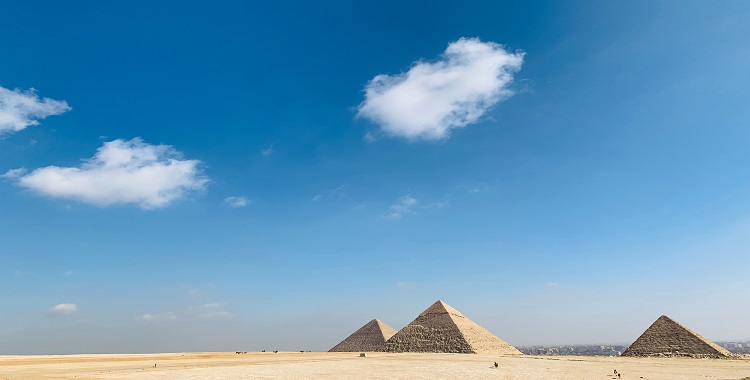 What you seek is seeking you, Sara reads, a languid smile on her 26-year-old lips as she flips through a faded blue notebook and pauses, as always, to absorb Rumi’s eternal quote on the electro-physics of love.

Above her hotel room (the Oriental Deluxe, they proudly call it) at the Al Nabila Cairo, the sky is turning violet. The rousing chants of prayer waft over the Al Azhar mosque and snake around the throngs of hijab–clad women on their way home from the Friday evening market.

Sara stretches on the plush, queen-sized bed, still jetlagged by eight hours of travelling from Mumbai via a bleary-eyed dawn stopover in Dubai. Mid-air, her stomach had felt queasy, a combination of tepid airplane champagne and the bubbles of anxiety that floated through her mind. Would she recognize Abid straight off, would they have a moment where their eyes would connect and they’d just know they belonged together? Side note: Prime time soap opera writer that Sara is, she imagines here’s where they up the background music, go into slow motion moment of realization and fade out to kitschy rom-com heaven.

Anyway. Sara first saw Abid, tall and slim, in Arrivals that morning, a placard in his hands with her name on it, something he’d learnt to do efficiently in his training at Rameses Tours. She smiled, he smiled, the driver took her bag. Abid asked Sara how her flight was, and shyly added that she looked pretty in her green dress. Sara was so relieved by his approval that she affectionately reached for Abid’s hand, but after a short squeeze, he’d dropped it abruptly and made a joke about Public Displays of Affection not exactly being the way of life in Egypt. Sara felt a sharp stab of guilt, then a familiar humiliation, but Abid whispered softly about how he only wanted to protect her from the judgmental eyes of the old ladies at Customs. Sara was overcome with gratitude then, a wave of sweet girlish sentiment washing over her all through the ride to the hotel, where Abid had deposited her with a gentle embrace and a solicitous suggestion that she rest until he picked her up later.

Abid and Sara had met on a test social networking site six months prior, in the experimental online technology boom that summer of 1998. Sara was one of three flatmates in a crowded 2 BHK, a modest suburban apartment in the back lanes of Bollywood’s stomping ground, Lokhandwala Complex. She was between a television gig that she’d given up and starting a writing job on a feature film that was taking forever to get greenlit. Sara had also just discovered that her on-off boyfriend, an ambitious first AD, preferred auditioning upcoming starlets to hanging out with her. At least on six and a half days of the week.

Sara met Abid in a chat room. Her bottled up feelings had tumbled out via keyboard to this exotic stranger with a name that meant, ironically enough, He Who Passionately Adores. When she managed, clumsily, to upload a photograph, he told her that her name, Sara, a derivative of Moonlight, made her beauty even more luminous. Abid was a man who believed that women were delicate creatures in need of love and protection; he was a regular Arab Sir Galahad of the soon-to-be millennium, who wrote to Sara night after night, high speed modem crackling with passion, of how he felt, knew, that she was The One.

And then, in his casually insistent style, Abid had offered to organize a cheap air ticket for her. One way, for the time being. Sara had insisted on paying half the fare, in honour of her French grandmother’s earnest post-war feminism, or maybe simply to signal to her online lover that she was not the sort to take advantage of a man’s generosity.

And so, here Sara is. For a week, maybe longer, in this hot, ancient city with a man called Abid, the One Who Worships (Her).

Sara gets ready and meets Abid downstairs in the lobby. This evening he wants to take her around the overwhelming sights of the city. Cairo comes alive after dusk. First, they do the short ride on the Nile Queen. A tourist trap, Abid says, but charming nevertheless. Then they cruise the colourful bazaar in the old town where shopkeepers smile and nudge and bless them – well, if only for a few extra Egyptian pounds. They have strong black coffee in a dark, indoor tavern-style place and Sara agrees to puff from the hookah pipe – although it strikes her that she is the only woman doing so, and the only woman in the café.

Tonight, Abid says all the right things. He isn’t rude, like the desi men back home with their boorish pick-up lines. When Abid compares the skin of Sara’s shoulders to alabaster, smooth like Queen Nefertiti’s, she believes it. When he escorts her to her hotel room door, and tenderly kisses her goodnight, she cannot help but feel captivated.

The next morning, Abid leads Sara through the labyrinth that is the city’s Khan-El-Khalili market. In a souvenir shop, he picks out an aquamarine beetle pendant, flecked with gold. This is the sacred Egyptian scarab, he murmurs, threading a delicate chain through it and placing it around Sara’s neck, the jewel finding its place at the centre of her chest. Abid approves, chuckling that in his culture, the heart is more important than the mind. There will be more gifts once she’s met his family, he adds, once they have formalized their union. Sara blushes, partly from her lack of comprehension, partly from the gaze of a curious onlooker, partly from the intimacy of Abid’s cool fingers grazing her collarbone.

They visit his home then, a working-class apartment in the noisy old section, where his mother lays out more sweet thick coffee and where his sister hovers, a crying baby on her lap. Abid introduces Sara proudly, like a precious item that he’s managed to somehow get at bargain price, much like the scarab that invites appreciation from both women. They are friendly, curious; at the same time distant, suspicious. Abid is his warm, witty and affectionate self so Sara is surprised when he suggests she help his mother clear the table. He says it a little too sharply, like a command, she thinks, and she is hurt, a touch annoyed, because help is something Sara always offers, to everyone, without ever needing a prompt.

Abid’s sister Mira laughs quietly then, and snidely remarks that Egyptian men, like all other Arab men, have a mantra. Men are pilots, women are co-pilots. That’s the secret of success in relationships. Mira’s eyes glitter. Why do you think we’re not getting divorced every day like all those directionless folks in the West?

Later, at night, after having sex in her hotel room, sex that is neither good nor bad, Sara lies still under tousled sheets. The queen-sized bed is hard for her back. Abid, who feels grimy after love-making, is whistling under the Al-Nabila’s seven-star-high-pressure shower. A few seconds later, the bathroom door swings open, and Abid emerges in a towel, strong and slim-waisted, like the Sun God Ra. He bends to kiss Sara, the limpid-brown romantic longing in his eyes now tempered with  male practicality and authority. Tomorrow they will drive out to Giza. See the pyramids. The wonders of this glorious civilization which, as Abid’s soon-to-be wife, Sara will soon learn all about. The family is already making wedding plans, he grins.

Sara does not tell him that by morning, she will be on a plane ride out of here. Direct to Mumbai, not via Dubai. That she’s already booked her ticket, sometime after the comment he’d made post sex, pre shower. An innocuous comment, that her pretty green dress actually shows too much leg. Attractive, yes, but appropriate, no.

Sara’s next trip will be different. She’ll stay right in front of the warm glow of her computer screen, reveling in that secure haze of inner fantasy that the harsh swinging doors of reality always manage to crash down. Her mind wanders. She will get more serious about her writing career. Organize the apartment with some new furniture. Maybe build a bookshelf to liven things up. She may or may not keep the Rumi collection: Lovers do not meet. They are in each other all along. Who knows, really?

Sara hears Abid out on the balcony, cordless phone in hand, instructing a junior colleague at the agency in Arabic, then chuckling, playfully, at a joke that passes between them. She closes her eyes, allowing the sound and scent of Abid to fade out and away, and thinks of immediacies. A bit of packing, an airport cab booked from the reception downstairs, the inflight movie she wants to see on the way back, with concentration this time, and all the other things she will do when she gets home.

Photo by Dave Ang from Pexels

Selina Sheth is a Mumbai-based writer with fiction and non-fiction writing credits across the print, screen and digital media. After starting her career as a broadcast journalist on BBC World’s India Business Report (1993-98), she gravitated towards film and television story development and screenwriting, alternating between freelance projects and a commissioning position at Sony Entertainment Television, Mumbai. In recent years, she's had articles and essays published on platforms such as Arre, Scroll and The Wire. One of her short stories, Working Title, is published online by Juggernaut Books; another, In Three Months A Tree, was shortlisted in 2017 by the Commonwealth Writers Association for a proposed anthology.