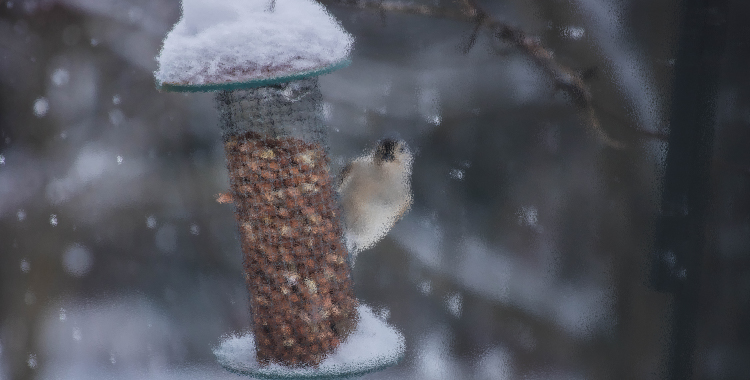 At our house in the woods, we often put out a bird feeder in winter once the bears hibernate. This year we were late about it, well into January. In fact, it had been a couple of years since we’d bothered. I remember being amazed years past at how it would take only a day or even just a few hours for news of easy pickings to go viral and soon there’d be a flurry of chickadees, juncos, nuthatches, and blue jays competing for sunflower seeds amid the cold season’s scarcity. A downy woodpecker would be at the suet in no time, pecking at the caged block of fat.

This year, days go by and no bird appears. A week and then two weeks. Not a peep. Even the squirrels that usually loop the ground underneath for spilled seed are strangely absent. It’s eerily quiet where it hangs undisturbed. I consider playing bird sounds from my laptop to try to draw them in, perhaps install tiny speakers in the feeder, and then, if still no birds come, at least we’ll have the approximated atmosphere. I start to wonder if Rachel’s Carlson’s Silent Spring has arrived, if we’re already witnessing The Sixth Extinction described by Elizabeth Kolbert in her book about the impending species collapse if we don’t change our ways immediately and dramatically. Bird populations have been declining for years, but could they really be wiped out from pollution and climate change already?

Product idea: decorative bird feeders that simulate the sound of birds chittering, just like in the good old days.

A friend recently emailed about Thich Nhat Hanh, a Buddhist “celebrity” monk she met on a weekend retreat to a monastery not far from here. He’s terminally ill and refusing medication, explaining that he’s ready for his transition and liberation from the cyclical nature of existence. I consider the possibility that all the animals facing extinction are enlightened beings ready to escape the suffering of samsara. I suppose that’s one way to ease the bleakness of imminent planetary genocide—and the guilt of responsibility.

a blue field of circuits
and no precipice from which to jump,
consciousness uploaded—no escape
backspace delete disabled due to
back up clouds hovering like mosquitos
virally secure like mise en abyme like
except unless to disappear via merge
they called it collaboration submerge
into the hive

I go back the article I’m reading that coincidentally refers to a customs guard eating sunflower seeds at the border of China and Kazakhstan. In The New York Times Magazine, Ben Mauk describes the Belt and Road Initiative and a place called the Khorgos Gateway, a gigantic shipping hub of crisscrossing trains, superhighways, and oil and gas pipelines China is developing that will shoot out in all directions, gripping the earth like the spread fingers of a giant’s hand. In one of the least populated regions in the world where nomads roamed for centuries before Soviets forced the Kazachs into wheat farming, an incipient city of not-yet-inhabited high rises shoots up from the vast grasslands on the Chinese side of the border. In a reversal of wandering, the planned network will deliver goods and people across countries to every corner of the earth, beneath the now vacant bird migration highways that once ribboned the skies. One passageway will terminate at a Siberian port from which surely routes are already planned across an iceless Arctic. I picture the barge crews taking selfies as they glide over North Pole. #SnowlessSanta #ontopoftheworld #NoMorePolarBears.

The New Silk Road as it’s nicknamed will cut through Europe, the Middle East, Africa. One planned superhighway ends in Venice, which will likely be underwater in a couple of decades. I imagine future advertisements for a Venice SCUBA adventure! An underwater tour of the old city, submarine gondolas, Atlantis found and made into a theme park. I picture trains full of genetically modified grains speeding across a scorched planet to people hole up in apartments without jobs due to the advent of artificial intelligence and robots, eating sunflower seeds shipped from inner Mongolia and watching old National Geographic shows to see what animals were like in between virtual reality games and porn delivered via 5G networks running underground and under the dead oceans. Perhaps uploaded DNA from all the extinct life on earth will be used to 3D print home dioramas. Product idea.

The article says that a local Kazakh man drives the journalist to the foothills of the white-capped mountains where hawks circle overhead and the beauty of the steppes is indescribable—so the writer thinks until the driver offers a telling simile: “It’s like a screen,” he says—then explaining he means as beautiful as a Windows computer screensaver.

Is an orange fruit
in a blue poem
really blue
due to
the blue poem?

Or is it actually more orange than it would be otherwise?

Or is it something else
entirely?
Like a tire sale in a high-rise penthouse
enclosed in mirrored glass
reflecting the blood-orange ball of the sun
against a poem-blue sky?

Due to potential negative PR, China is trying to subdue word about the 1,000 concentration camps that sprinkle the land-locked province of the region where the hub is situated and where they re-educate “extremists”: Muslims who have dared pray in public, own a Quran, or grow a beard. According to the article, as many as two million Muslims have been incarcerated, and those who aren’t are tracked under tight surveillance. This seems ironic paired with the free-trade international zones that this New Silk Road promises. I think of a recent News Hour episode about human microchip implants. We won’t have to carry around passports when our “papers” can be scanned with an upturned wrist and undesirables can be surveyed via GPS.

A commercial for the Chinese global highway spins Coca-Cola’s classic jingle, “I’d like to teach the world to sing” and riffs, “I’d like to build the world a road.” The video lands on the tagline, “What the world needs today, It’s the real thing.”

The bird feeder hangs lifeless tonight under a January blood wolf moon and what will be the only lunar eclipse of the year. Single-digit temperatures, we look through the window as the bright disc rises above the bare tree limbs that cast stark shadows on the crusty snow-covered ground and ghostly clouds wisp by—a poem in the sky. I consider shooting a video to post on Instagram, but on second thought, surely people with much better cameras are already at it. Sure enough, the social media hive is buzzing with blurry moons and NASA’s live feed shows the cratered surface in much greater detail. We watch the eclipse on a laptop while glowing Luna starts hemorrhaging in the cold night outside.

On January 3, China made history by landing the Chang’e 4 Probe on the far side of the moon to investigate the possibility of growing vegetables in a mini biosphere. I wonder if the spacecraft is alighted there now, its robotic insect legs gripping rock, facing away from us and free of earth’s radio frequencies, oblivious to the eclipse on the other side. Will the moon be a free trade zone along the superhighway some day with biosphere farms, a few mines, an amusement park?

I close the curtains, slip through the screen door, and into my fields of circuits, long grass, giant sunflowers, robotic bees, and beautiful torsos stroking themselves across the surface of a glacial lake. I embrace my own extinction by surrendering to the screens of the inexorable future. VR nature nostalgia and porn to fill eternity. After all, what’s real anyway? The characters in the novels I read and write are as real to me as anything else—maybe more so. For all we know, we are living inside a simulation ourselves. Perhaps we are a simulation of a simulation even as we create our own simulations. Does that make us any less real? Perhaps if we figure out exactly how many layers of simulation our universe is comprised of, our Programmer Gods will reward us by deleting us from our simulated samsara. Liberation.

Let’s paint the attic floor like the ocean
and swim out the window and go to sea
and paint it like the attic floor and take a walk to see
what’s out there over there but what’s under there?
Lots of saline solution and a few extant watery beasts,
and way way way
under
that’s the snoozing seabed.
Let’s paint it like the sky
so the sky has a limit,
and meanwhile
back home
the old sky slips through the window
And swallows us whole,
a sink hole,
a black hole,
though we never painted it that way.
We just rendered the world up side down
And finally got what we really, really

Today I sit and wait by the window. I watch the feeder until finally a winged wanderer scoops through the air and alights to peck out a seed like a miracle. At least one chickadee remains here on earth. He zips off to a nearby spruce and disappears into the long shadows of the vacant forest, his vanishing song falling on no human ear. A real thing.

Photo by Forest Simon on Unsplash

Troy Ernest Hill is close to completing an MFA in creative writing at The City College of New York, where he won The Doris Lippman Prize in Creative Writing for a novel in progress and The Stark Award in Drama in Memory of Ross Alexander for his play, “Sweet Dreams.” His work has appeared in Lethe Press’ Best Gay Stories 2017, The Hamilton Stone Review, Sobotka Literary Magazine, The Promethean, and Underground Voices. His play, “Home Again,” was produced by 91 LLC at the Abingdon Theatre in New York City.