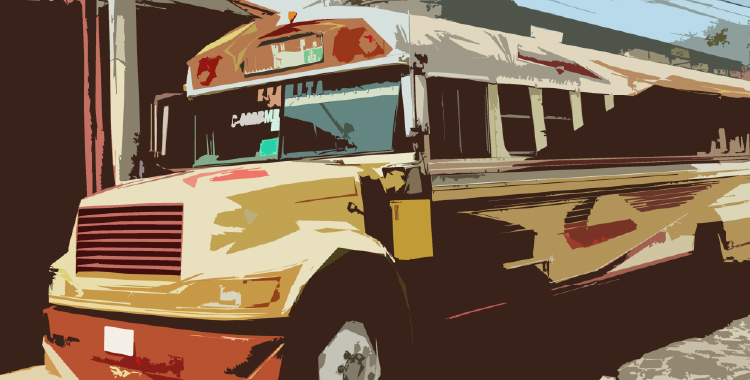 Now for the eulogies. My brother goes first. He sobs. He and my father were close. They were both good at science. I can’t say anything about the beatings I took. He never beat my brother and I wonder if he ever understood my pain. My father didn’t. Our mother said I was difficult. My parents had visions of me going wild, of dying in a knife fight after riding a motorcycle hair-um-scare-um to a plaza parking lot late and night, and bleeding through an imaginary black leather jacket as the rumble scattered. I never wanted a motorcycle.

I’m traveled. I’ve gone everywhere by bus. I’ve met more people that way. I’d come home with stories about women with chickens and the army in Guatemala pulling the men off the bus, except me, and the bus driving on, leaving the men behind and a woman asking me to hold her hen while she wailed. One of the soldiers on that long, muddy, poverty-stricken road between Chimaltenango and Cóban reminded me of my father, and I thought, “Fuck it all.  He’s following me, not as a shadow but as a presence casting shadows.”

Of course, my brother breaks down. He sobs. It is unnerving but moving at the same time. My turn comes. I have the notes in my hand. I stand at the lectern in the funeral chapel. The organist has just finished playing an interlude. “Nearer My God to Thee.” They played that when the Titanic sank. My knees want to buckle beneath me but I hold on to the oak stand. There’s a tasselled drapery hanging from the front of it. I want to grab it and wave it in the air, and sing “She’s a Grand Old Flag,” just to say I got the better of my father. But I don’t.

I begin. I say I had a father and now he is gone. That’s obvious. He’s there in his box, mercifully with the lid shut, his hands folded the way he would stand in church to pray, a gesture of reverence, his head bowed to show respect to God. He caught me once looking up at the stained glass window during the Prayer of Confession. He reached over and hit me in the back of my head and dropped his chin to his chest as if to say, “This, idiot, is the way you’re supposed to do it.”

But instead of continuing with the eulogy I’d written, a script vetted by my mother and brother to make sure I wouldn’t say anything wrong in front of everyone, I stare at the light pouring in the chapel windows. It is a warm day. The casements are tilted to let in a breeze, and birds outside are singing to the sunlight. I point to the light that plays through the windows and touches the opposite wall. The gathered turn to see what I’m looking at.

And I ask them as much as I am asking him one last time. Goodbye is not entirely appropriate to someone who is left with wounds.

“Is there a time for remembrance? Yes. Is there a time for forgiveness? Perhaps. My father believed everything he did was good. And yes, he did a lot of good for many people, but that good is the hardest thing to understand if two people cannot speak to each other in the same language, shining like the small candles they are. There’s light inside us all. And what I am about to say will puzzle you. It troubles me. During my wanderings, I found myself in a dense jungle in Central America. The bus I was on broke down. I was warned not to go into the jungle by the bus driver, but I was drawn into the shadows and the darker it grew around me the more I thought about my father. All I could see were fragments of sun, high and beyond reach in the treetops. It is our light, not our darkness, that frightens us most because we lose responsibility for ourselves. I am blinded to my father’s love as much as he was to mine.  And that’s what we must fear most. We must fear the light. And more so, we must fear the light that blinds itself.”

Photo by Shreena Bindra on Unsplash

Bruce Meyer is author or editor of more than sixty books of poetry, short fiction, flash fiction, non-fiction, and literary journalism. His next book of flash fiction, Down in the Ground, will be published by Guernica Editions in 2020. He lives in Barrie, Ontario.