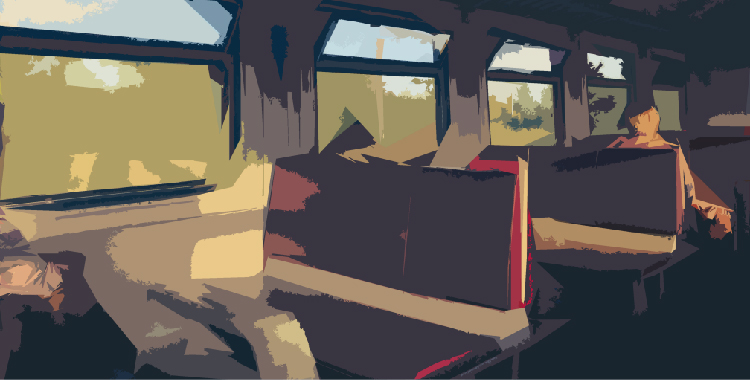 Train travel was slowly dying out like the art of writing letters. I didn’t care for such statements made by various people I knew. I still enjoyed doing both, maybe the former more than the latter. I was sitting with my legs crossed on the train, deeply immersed in Murakami’s latest literary piece, only looking up to see the snowflakes melt against the heated window of my compartment. I still had a few hours till I reached my destination and my mind was deeply content because I knew that Dadi had packed some spiced cakes for me in the morning. Perhaps that was the soothing smell that I could feel floating in the air. These were the days I treasured in my mind, being alone, yet not too alone. Human presence was lingering here and there, the train conductor moving from compartment to compartment and random children occasionally jumping around.

Around 1:30 pm a young couple board the train and much to my dismay take a seat in the neighbouring compartment. I glance towards them and notice that the woman is a young blonde, well dressed, perhaps in her mid 20s. The man seems about the same age, black hair, dressed in somewhat more casual attire. They loudly talk about simple things like the weather, weekend plans, none of which interest me as I try looking harder at the sentences in my book to block out their chatter. The man picks up the crumpled newspaper in front of him and begins scanning it, as if he was looking for something else to say to the woman.

“Bloody terrorists and immigrants are all the same, I tell you. There is no difference between the two.”, he gruntled.

“I know…I wish the government wouldn’t be so lax with them. Hopefully, something will be done soon”

“They should be wiped out…they are all dangerous!”

Their laughter fills my ears with hot air. I become stiff in my chair, not realizing that I had already hidden my differentness years ago when Papa forbid us to wear our faith on our bodies. I wanted to say something for myself, something for us. I could…I could say something, but life is not a movie. It was better to stay silent and not react. It was okay. I was safe here, I kept telling myself as I tried smelling one of the cakes and noticed that the snowflakes weren’t melting anymore. Perhaps Dadi’s stories were getting to me.

Miriam cleans the drawing room and notices that Ayesha has left her earphones once again. She will be calling me and saying, “Dadi! Dadi! Have you seen any of my things lying around?” she thought to herself. Not realizing that her old Dadi knew what earphones were and hid them underneath her dupatta, hearing Rafi’s old songs throughout the day. The house creaked like Miriam’s bones, but it stood the test of time just like her family had. She picked up the pink, grubby earphones and put them on the table, noticing the Urdu newspaper. She slowly picked it up and saw the big words on the front page.

“59th anniversary of the Partition”

The words strongly pull her back to rural India, making her 11 years old again.

It was an abnormally dark, summer day. The sky was stained red and grey, as if the earth was mourning for something yet to come.

“Miriam beti, you must be brave and go with them”

Miriam hears lots of shouting outside the house, which is interrupted by the sound of a car stopping nearby, things were never quiet anymore.

“You must do as I say Miriam and I will see you in a few days when it is safe. This is the only way. We can’t afford to lose you. The unrest is increasing day by day and Muslims are being slaughtered like sheep all around the village. If anybody asks anything, don’t answer. Stay mute. Never utter a prayer under your breath or even your name.”

Miriam felt the hot tears rolling down her chubby cheeks. Ammi gave her a bag with fresh roti, some sweets and a set of clean clothes. I don’t understand all this hatred for us, she thought but knew that Ammi avoided saying anything on the matter. She must be scared for Papa, Miriam thought and quietly wiped her tears with the cloth bag.

The car outside was for her. It was the last time she saw her mother.

She folded the newspaper neatly and placed it inside a drawer, because she knew that it was a part of her and she couldn’t stash it away like everything else that mattered to her, to them. She learned how to treasure even the painful memories, even if it occurred under a sky that she couldn’t call her own.

“Ayesha must have reached by now”, she said over the phone, smiling to herself because she knew that her granddaughter will never be haunted by the same ghosts.

The train stops at Calais and I can’t seem to get through my book. My body still feels uneasy and I can’t slow down the pounding in my heart. The couple are still beside me, but it isn’t them. It isn’t them who makes me feel this way. It is much deeper. I realize that coming here hasn’t changed much for us. I grab all my belongings without looking back.

We are still very much de-parted.

Photo by Nata nata on Unsplash

Lubna Umar recently graduated from Wilfrid Laurier University with an MA in English. As an English writer and scholar, Lubna enjoys exploring post-colonial dialogues through her essays and fiction.