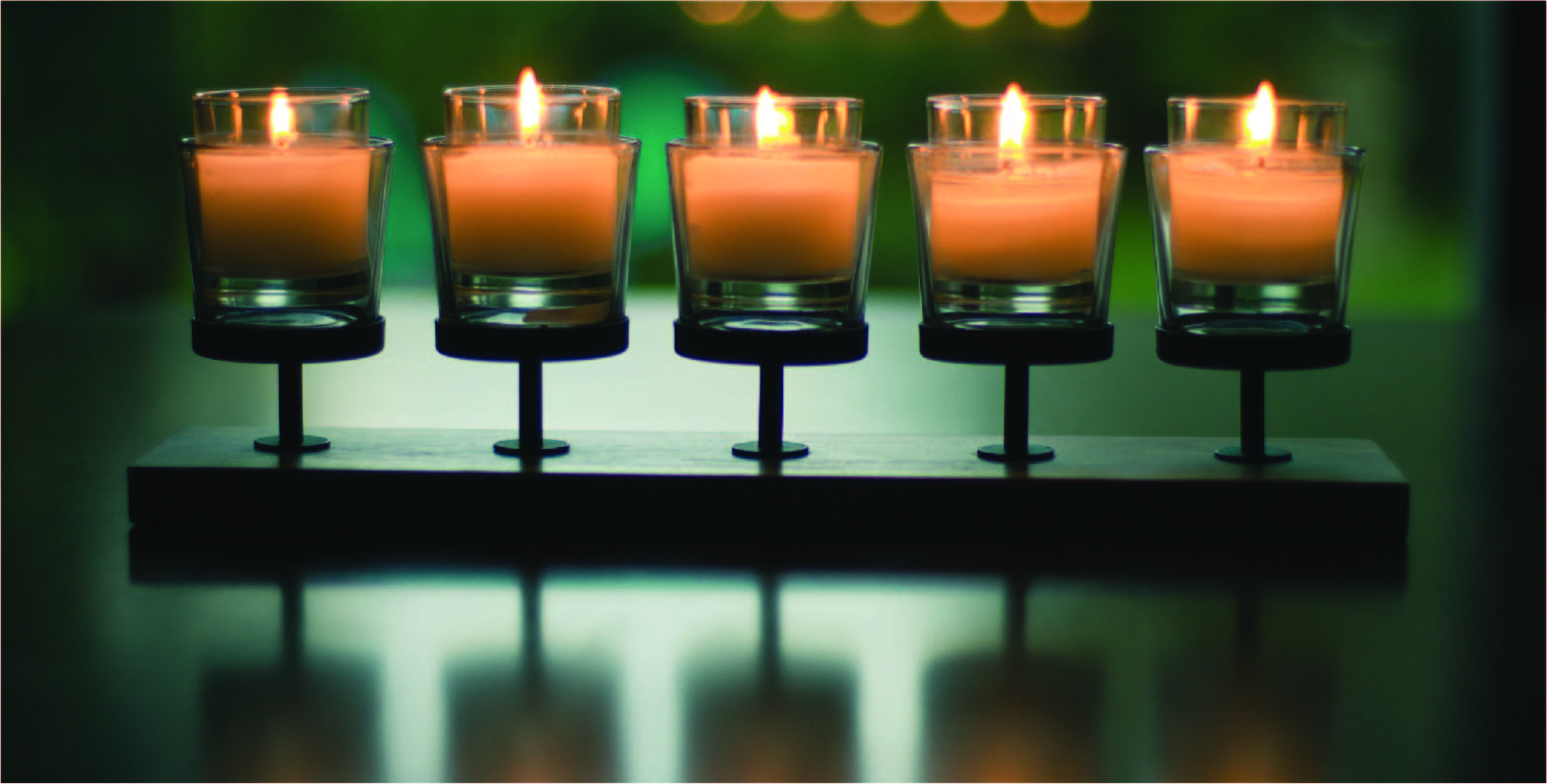 One dollar Australian only buys Barb one votive candle, or so goes the unspoken rule of the chapel according to the other tourists in the Colombianzócalo, the price ticking up over the years since her church group’s visit here a decade past, like a celestial prime rate set by the archangels of inflation.

In the darkened alcove for Santa Barbara, a sprinkling of votive candles blazes, the source flame nestled in the belly of Barb’s patron saint, the fire within a white hot glow of destruction, desire, rage, rebirth. Fallen away Catholic though she is, Barb fancies lighting all the votive candles, a crowd of fiery lights all bending God’s ear in her favor, sensing in her gut that she will need her namesake saint Santa Barbara in saving her from El Guapetón.

But one defunct Australian dollar note, a souvenir Rooboy, is all she’s willing to wager, heathen that she is now, so she folds it neatly like the indigenous girls fold the sun-dried bed sheets in the pensíon above Bogotá. She doubles its worthless paper over three times and presses the bill into the brass box that holds the treasures of dreamers and daughters and thieves.

Please, por favor, mi Santa Sagrada, she mutters, mimicking the voices of the village girls praying to their sacred saints at their altar in the barren dirt of their courtyard.

Por favor, Barb says, thinking again of the triple-bagged cocaine pellets—las pepas–heavy inside her belly. She falls to her knees in sudden contrition now. Her fear deepens, her thoughts rush: please, please, she prays, just let me get through this. She fumbles in her bag for a newerAussie dollar cointo drop into the votive box but finds none. She bows her head, felled as she’s been by the lure of quick money and adventure. She clasps her hands and presses them against her forehead—a reluctant penitent–her skin damp with the dread of the cold hard gaze of the customs agents soon to be upon her.

She is bound now inextricably into service to El Guapetón, the handsome one, the dashing local handler for the other tourist drug mules they’d met at the club, she and her girlfriends with their heads spinning with margaritas and blow, bedazzled by his charms, these fading gringas out for a last lark of their twenties, a final walk on the wild side to reminisce about when they are old. Fallen Catholics, fallen women, easy marks.

Outside the chapel the airport taxi sounds. Her reckoning awaits.

Por favor, Santa Barbara, Barb whispers to the saint chosen by family so many years ago. Patron saint of sudden death, of tempests, soldiers, beheaded daughters. Her forgotten faith calls to her and she leans toward it in earnest now, wondering if they hadknown then, her family, that she would come to this, pleading with her patron saint to save her? Like Santa Barbara she too is an only daughter and still unwed, still turning her heart hard against the sweet young men who’d come calling in her father’s house. Like Santa Barbara she too fled, out of the confines of her west Australian town into the wide world beyond. But their paths, hers and her saint’s, thenceforth parted.

Trembling, Barb touches the lighting taper to the flameand, watching it burst alive, lights her votive candle for the blessed Santa Barbara. It glimmers and dances, this relic of conquistadores, protecting her, perhaps, perhaps not, as Santa Barbara’s history tumbles back to her.

Santa Barbara the Martyr betrayed her pagan father and fell in love with Jesus. Virginity and piety and humility enveloped her, and her father raged. She fled into the hills opened for her by divine command. And there she hid until a shepherd revealed her. Captured and beaten and starved, dragged naked through the streets of her father’s pagan city, burned with torches, still she did not denounce her Lord. Jesus healed her wounds and the unfallen angels clothed and shielded her, and again her father raged. He drew his sword and beheaded her, his only daughter, the virgin, the Christian, and still unwed. Her martyred head, bleeding and beautiful, lay still upon the ground.

There, alone in a chapel ten thousand miles from home, Barb weeps for the once sweet child of Santa Barbara she was andcan be no longer, the innocent girl, child of Christ,beloved by all, gone. What had become of her mother’s child? Her father’s angel? Por favor, she murmurs, praying to her namesake for deliverance, a second chance at choosing. She grips the wood of the prayer stand, the prie-dieu, el reclinatorio worn smooth with a land’s lamentations of five hundred years.“Wanderer, there is no path,” the shadows say, “The path is made by walking.”

Suddenly, blinding white pain surges through her. Spasms knock her to the ground and pound her head against the stones of the ancients. She grows cold, a deep blue engulfs her. Her eyes roll back and the blessed Santa Barbara comes to her, naked, emaciated. Por favor, Santa Barbara, her vision cries, and the faces of hacienda girls appear. Por favor, Santa Barbara, they cry, and the blessed saint’s pagan father brandishes his sword. His face melts into the smiling face of El Guapetón, the vanquisher. The martyred blood of Santa Barbara drips from his chin. Flames lick at Santa Barbara’s conquered torso. The mouth of El Guapetón opens and severed heads roll out, one head, two heads, three heads, four. Their tongues black, their eyes a crystal white, they roll toward her, speaking Barbara’s name, her invitation to a beheading.

Death calls to Barb, as it called to Santa Barbara, and the beheaded bodies of village girls float before her, their bellies filled with desperation. Beasts of burden, the walking dead, bearing death in their entrails, their bodies twitching as Barb’s body twitches. Falling, she is falling, a black fog closing, closing, closing, until at last all is darkness. There, in a chapel on a hillside overBogotáa votive candle of the virgin Santa Barbara, martyr of Christendom, burns. The blessings of one discontinued dollar flick a lonely tongue beside the small, still body of young Barbara ten thousand miles from home.