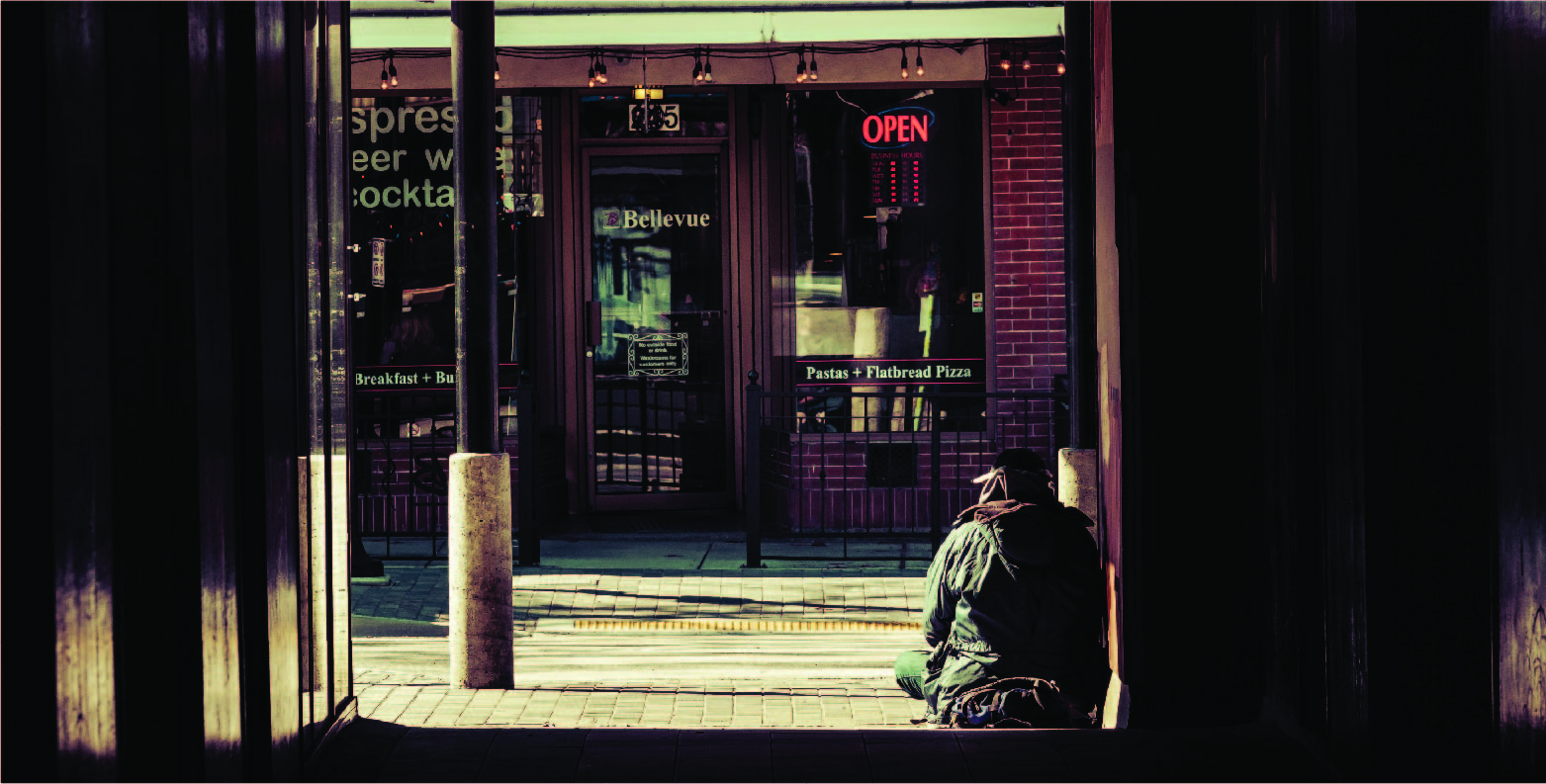 My brother and I park in the parking lot of Aldi, a German grocery store, and walk to the entrance.  Lying on the right next to the entrance is a middle-aged man, his clothes in complete disarray, his long blond hair dirty and disheveled.  In front of him is a white foam takeout box with food spilling out onto the sidewalk. Lying on his side, he hunches sideways over the food, picks it up from the box and sidewalk with his hands, and slowly brings it to it his mouth.

Ever since I was a child, raised in a well-to-do family, I have been aware of those less fortunate than me.  In Brazil, when I was about fve years old, my family, all of us, would bring food, clothes, and money to a family living in a favela.  I think that the perception of the huge discrepancies between their lives and ours affected me profoundly; throughout my life, when I come upon a beggar or vagabond, the emotional reaction is visceral, a punch to the gut.

Walking ahead of us is a black man with his daughter, who looks like she might be seven or eight years old.  He pauses just slightly, as do I, and enters the recycling section. I follow him and our eyes meet. I can see the sadness in his eyes, and I, too, feel the impotence he manifests by raising his shoulders ever so slightly.

Sean and I enter the supermarket.  When we come out, Sean glances at the man who is by now in a state of complete obliviousness.  And just as I’m thinking that sleep, if nothing else, must offer some relief, I hear Sean say: “Hah, a drunk!”  I hear the disgust and contempt in his voice. “Collecting welfare,” he adds. My heart contracts. “Alcoholism is a disease,” I say, almost apologetically, in an attempt to appease him.  “Naah,” he counters: “They get treatment here.” I assume that he’s referring to Germany’s free rehab programs. But I sense a disquieting implication in what he says. Bums are bums and nothing more; they’re just debris that gets in your way.  I so loathe his contempt for persons with mental or physical afflictions that I am tempted to punch him in the face, even though he is 6’2”, way taller than me, overbearing and aggressive. But I am staying with him temporarily in Germany, so I keep my anger to myself.  And I know that he is quite capable of flinging me to the ground and pounding the hell out of me; it has happened before.

We approach the car.  But it’s not over for him. “Scum!”  He spits out the words. And with that he swats the scene of a man laying unconscious before him away from his mind, like an irksome fly or a piece of discarded trash you kick out of your way as you walk back to your car.

Anita Lekic has a B.A. and an M.A. in English and a Ph.D. in Slavic Languages and Literatures. In the nineties, she taught at the State University of New York at Stony Brook as an adjunct professor and later moved to The Hague in the Netherlands to work as a translator for the UN War Crimes Tribunal. Anita now lives in Portugal.